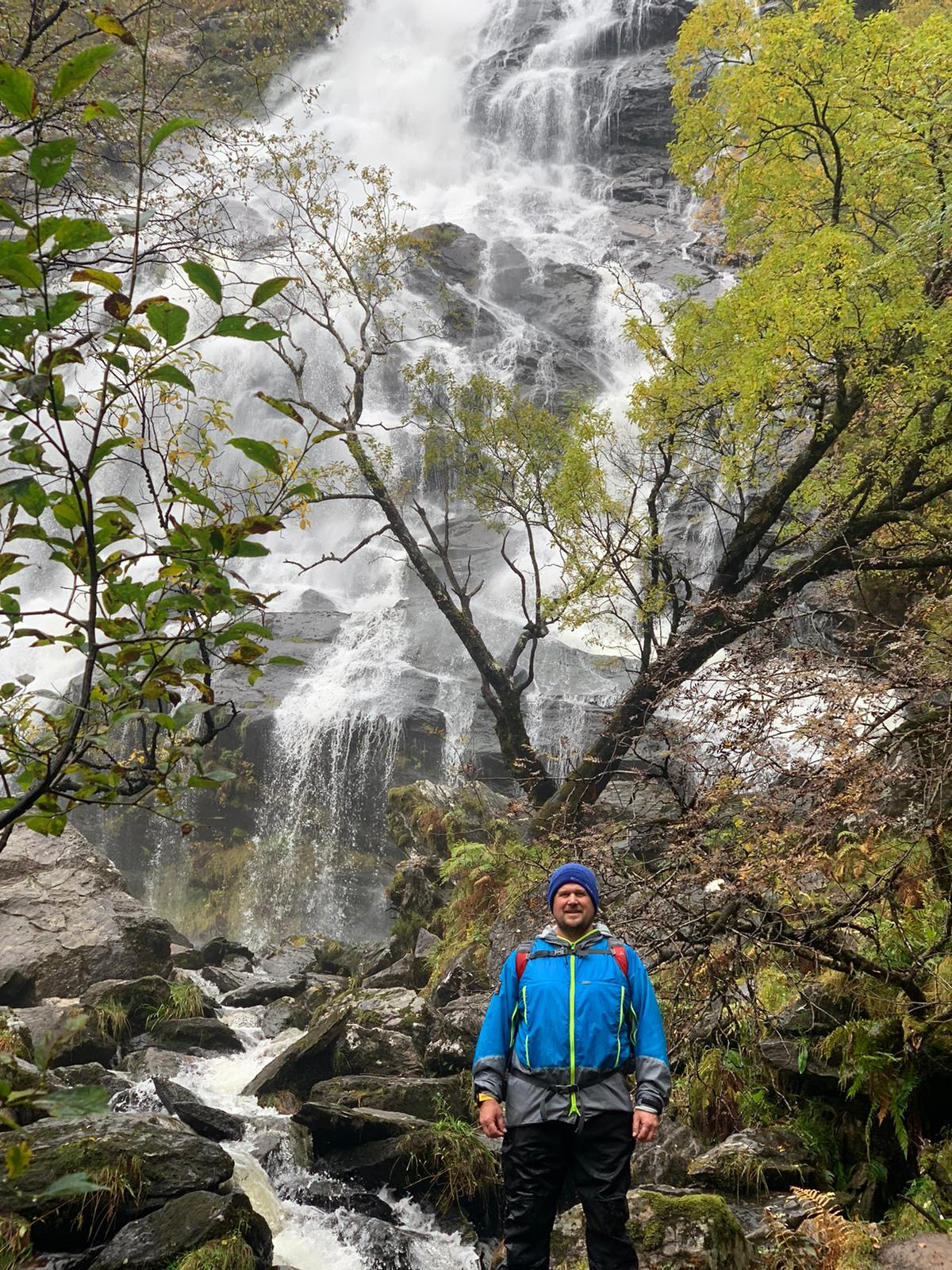 We take a look at a fantastic family friendly walk to Steall Waterfalls set in the foothills of the Glen Nevis range, which you might have seen somewhere before! 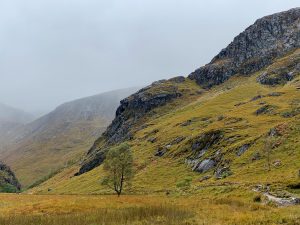 Thankfully, the walk itself is far easier than finding the car park – which is a great start! The car park is tucked away right at the end of a long one track road. Thankfully on our visit, we didn’t meet another car, but if we had, some top notch reversing skills would have been required.

Although remote the car park does have a name and is known as the Upper Glen Nevis Car Park and can quickly get very busy thanks to this popular walk…. and its free – bonus!

The draw to the car park is Steall Waterfall, the second highest waterfall in Scotland, and with a drop of 120 metres it is some way off being the highest, but is extremely impressive and for those in the know was used in a scene in the forth Harry Potter film when Harry is having to deal with a dragon.

Thankfully, the dragon problem has now subsided and once again the walk is a relatively easy 5km (2.5km both there and back) and although a clear path is easy to follow throughout some solid footwear or hiking boots is recommended.

It is a must visit for anyone passing through.

The walk begins from the car park and weaves its way through forest with a number of babbling mini waterfalls all adding to an energetic, fast moving river that you follow which is named on the maps simply as, ‘Water of Nevis’.

After a little over a kilometre the path flattens out and the forest gives way to a large valley with the waterfall itself coming into full view for the first time. At this point you are still around a kilometre from the falls which doesn’t initially do the falls justice, but as you edge closer to the torrent of tumbling water the scale of the waterfall becomes more and more apparent. 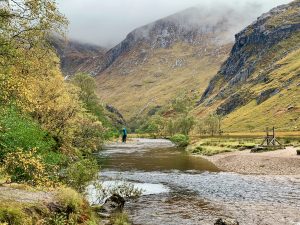 At this point the river winds itself around the valley floor and with the falls on the other side of the river it means any easy access to the falls is cut off. This means if you are tall (and brave) enough there is only one way to visit the base of the falls and still keep their feet dry. Here spanning the Water of Nevis River there are three steel wires that have a clearance of a couple of metres above the water. The wire being that thin that you are forced to take ‘ballerina’ style sidesteps to ensure your feet are planted safely, avoiding any slip into the cold, peaty waters below. If after the crossing your legs feel especially wobbly, don’t worry too much, as you can take as long a break as you want to pluck up the courage to make the crossing back over! CLICK HERE FOR A QUICK VIDEO 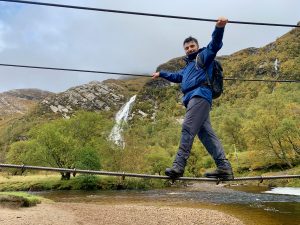 The falls and turning around:

At the base of the falls, there are rocks and spray and pools (hopefully still no dragons) and plenty of cool photo opportunities. On a nice Summers day it owl die a great place to stay for a couple hours and when you are done you can simply turn around and go back the way you arrived. For some this may sound a little boring, but the beauty of this walk is how different it looks on the way back!

It is not unusual when walking in Scotland to get 4 seasons in one day, so even the slightest change in cloud formation or movement can change the whole look of a valley 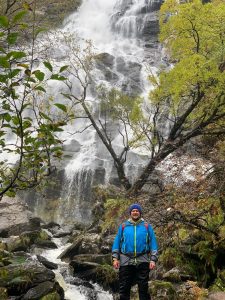 such as this. When we turned around to make our return, the cloud had cleared a little and the hills on either side had changed from a dark dull absorbent moss green to a glowing vibrant emerald sheen.

Heading through the forest track we also noticed rock formations on either side of the gorge that we hadn’t noticed before, as we walked we traced lines of cracks in huge blocks of stone which we hoped had been that way for some time. We even spotted what looked remarkably like an alien face etched into the wall.

We made it back to the car after a fairly leisurely walk in a little over an hour and fifteen minutes and recorded only 128 metres elevation gain. A fantastic walk that I would happily do again and again and hope to share it with more people in the future.

Based at 52 Degrees North in Stratford-upon-Avon, we are passionate about travel, having experiences and seeing the world.

For more updates on what we have been upto and where …. please check our blog!